Second Round Knockout: The Value of Testing to Learn in Package Design

This is the first post in a series called "Versus Victories: How Our Iterative Design Screening Tool is Changing the Game," where we highlight how actual brands and creative agencies are developing higher-performing designs with the help of better tools for early creative exploration.

Early and iterative exploration is an essential part of the design-thinking process, which is why we’ve developed our groundbreaking Versus design screening tool. It’s a fast and cost-efficient way for brands to test, learn, and refine designs at an early stage of the process, thus maximizing the effectiveness of the chosen design.

At Designalytics, we knew this tool would be useful for our clients, but even we were surprised by the degree of improvement it has unlocked for our clients’ package designs. In the coming weeks, we’ll share some stories of brands for which Versus has transformed their design process for the better.

We’ll start with a prime example: A client of ours, which we’ll refer to as Brand A, was a leader in the condiments space.* Wary of losing market share to competitors that had simpler designs (which have come into fashion), the brand wanted to test a new design that more closely matched that approach.

This was an ideal scenario for our Versus tool, as it allows for quick, reliable consumer feedback to identify how this new design would fare compared to the competition. Yet the brand also acutely noted that, rather than barreling ahead with a redesign, Versus could also be used to test its base assumption at the start. That is: Did they even need to redesign in the first place?

The idea behind Versus is simple: Pit two designs against each other, and see which consumers would prefer to purchase. (Versus utilizes a proprietary, highly-predictive metric that combines implicit and explicit consumer feedback to assess purchase preference.) It also collects qualitative feedback on why consumers preferred one design over the other, giving creatives actionable feedback to aid in refinement and provide inspiration for new design routes.

The brand understood the value of exploring as many concepts as possible, so it conducted 10 different matchups in order to learn as much as possible from the Versus screenings—setting the current design against key competitors, for example, as well as a few concepts created by an agency. (Note: The visual below only includes data for a subset of the designs tested, for the sake of simplicity.)

The feedback from more than 1000 consumers was conclusive: People preferred the current Brand A design to both of the competitors and to their new concept, and by considerable margins.

Rather than rely on validation testing at the end of a design process—with all the sunk costs that entails—Brand A had determined that the current design was already doing well. In fact, changing it would likely result in negative in-market outcomes. Crisis averted, right?

Well, that’s where this gets really good. Because, rather than getting complacent, Brand A saw an opportunity in those results.

The brand explored a number of different design concepts in Versus, and each of the matchups had provided it with hundreds of responses on why each consumer preferred the design they chose. These verbatim responses are a treasure trove of insights into how a brand can modify the design in order to amplify its effectiveness. In this case, a majority of responses coalesced around the taste appeal of the imagery… but with an interesting angle.

Words like “appetizing,” “appealing,” and “enticing” were used frequently. There was another notable insight, though: Several consumers also liked that the condiment was shown clearly on the food, so they could see how it was used.

“I liked seeing the use of the sauce.”

“The photo of the chicken with sauce was an inspiration.”

“It shows the finished product and that inspires me.” 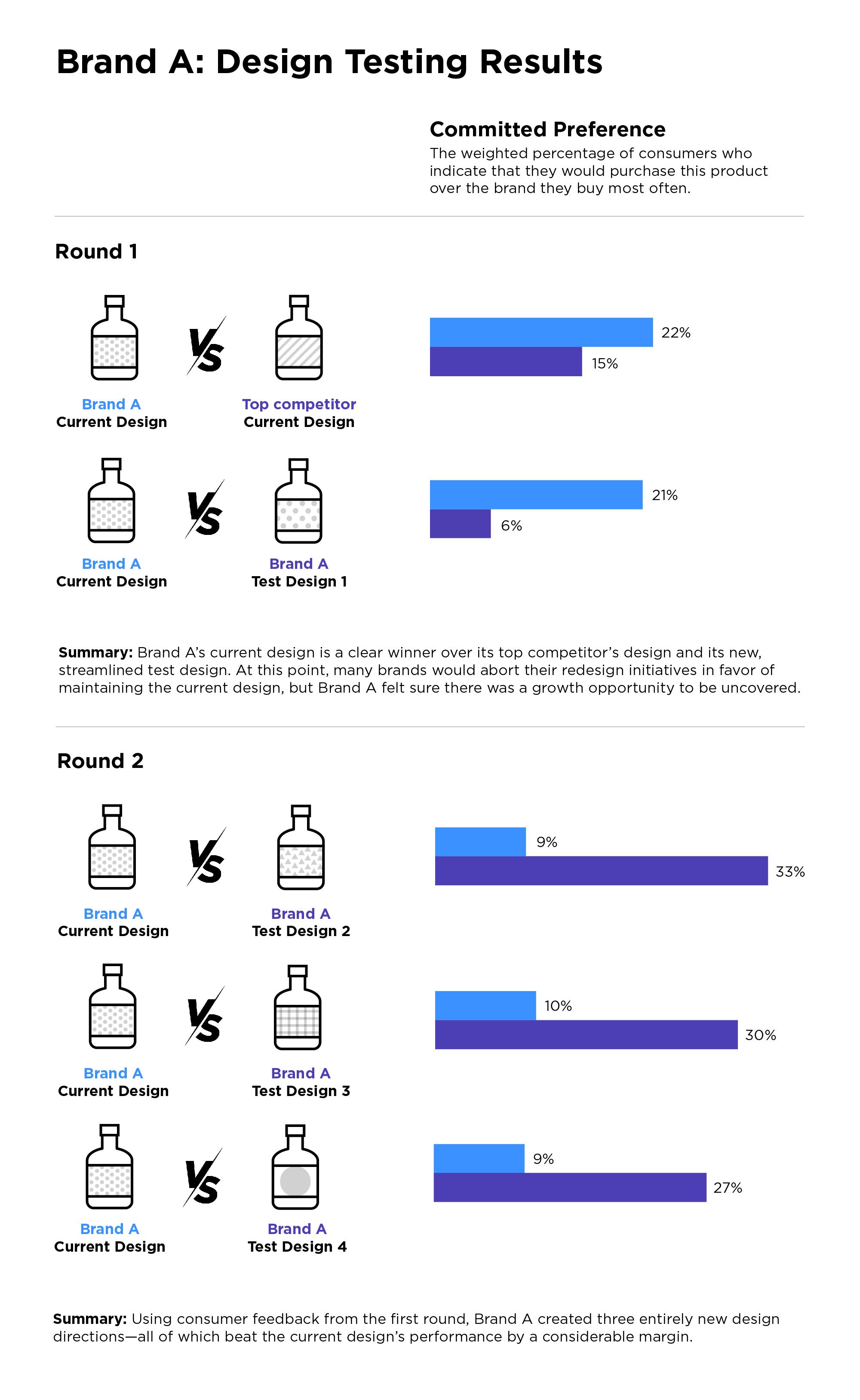 For some, this didn’t just look delicious… it seemed to awaken their inner grillmaster. They saw the image as a suggestion as well as a sensory cue. So Brand A used this input to create some new design concepts to test against the current one.

These new concepts included more cues to inspire one’s inner chef, including some tools of the trade.  And they not only outperformed the current design, they pulverized it.

Nearly seven out of 10 consumers (the performance results varied only slightly between each of the new design concepts) preferred these new, Versus-fueled options to the current one which had outpaced competitors. In other words, consumers liked the current design best… until they saw these new concepts, which they loved.

It’s all the more astounding because these new concepts only came about because of the consumer feedback from the first-round testing in Versus. It was a striking reminder of a design truth: Early rounds should be about testing to learn, not to win. Many brands expect to identify a clear winner right away, but that’s rarely the case. Iteration is extremely valuable—and often necessary—to develop a high-performing design. Software engineer Martin Fowler put this tenet of design thinking succinctly: “You should use iterative development only on projects that you want to succeed.”

Just to recap: Brand A conducted two rounds of Versus matchups. In the first, it determined that the current design was performing well—it outperformed relative to competitors and a new design concept they’d created to compete with said competitors.

Some brands would have stopped there, assuming the status quo was preferable. But because of what the brand learned directly from consumers—and because Versus offers exceedingly quick turnaround times at a budget-friendly price—the folks there said “why not?” and created a few new designs with this consumer guidance.

And these were all EN FUEGO.

The takeaway here? What is learned from the first round of Versus matchups will almost certainly produce massive improvements in a second round of matchups. And it can help send your design performance into the stratosphere.

More Versus victories like these are emerging with regularity… we’ll keep you posted as we find more. In the meantime, if you’re interested in learning more about how Versus can help your brand or agency, please reach out to us.

* In order to maintain client confidentiality in this case, we have blinded the client’s product category.